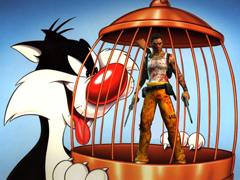 When The Suffering came out five years ago, it sounded like all kinds of terrible. It starred a bad-ass dude named Torque who fought torture monsters in a grungy death row prison block, and he could hulk out for maximum carnage, and it had like a dozen different guns and gnarly dismemberments and shit and it was all edgy, all of which sounded like it would appeal to low-IQ 12-year-olds but bore me to tears.

A friend of mine worked on it, however, so when I found it used a few months ago for super-cheap, I went ahead and picked it up. It sat on my shelf for a few months until last week, when I decided to try it out for the LULZ and probably get bored with it after an hour and never play it again.

I finished it last night, and I have to say that The Suffering is the best horror video game I’ve ever played.

Everything about this game is top-notch, from the writing to the sound design and voice acting to the level design and gameplay mechanics, and it turns out that if you create a beautiful game you can get away with making it be about “a bad-ass death row inmate named Torque”. The “torture monsters” — which I originally assumed were a goofy throwback to bad 90s character design when everything looked like a cenobite — actually work really well and make sense for the setting since they’re designed to be physical manifestations of various forms of capitol punishment. The game has two stories: the history of the island where the prison is located, and Torque’s attempts to remember whether or not he actually murdered his family. Both stories are told in a compelling way over the course of the game, and they frequently intermingle in unsettling ways. There are numerous, organic, alternate paths and cul-de-sacs, and they’re all worth exploring not for loot (which the game gives you plenty of on Normal mode), but because they usually contain another disturbing revelation about the stories.

In the “making of” video that’s included on the disc (don’t watch it until after you’ve finished the game, because it’s filled with spoilers), the project lead mentions that the game was strongly inspired by two of my favorite horror movies: The Shining, and the 1999 remake of House on Haunted Hill, and both influences definitely show in all the right ways. It also seems like The Suffering was in turn a strong influence on Bioshock, another of my favorite games; both games feature “flashbacks”, ghosts reenacting past events, and an intriguing setting with its own well-developed history that’s unraveled over the course of the game. Both games also feature “moral choices”, but whereas they’re boiled down to a stilted “HARVEST or SAVE” choice in Bioshock, they’re much more fleshed-out and natural in The Suffering. The first moral choice you’re faced with is a prison guard who is constantly verbally abusing you when he’s not threatening to shoot you. If you think of Torque as a cold-blooded killer, then you can drop the asshole and take his gun, but if you think Torque is an innocent man wrongly accused, then you gain a useful (albeit verbally abusive) companion (a feature that I felt was sorely missing from Bioshock) for the next section of the game. Both decisions make sense depending on how you want to play the character, which ultimately forms a stronger bond between the player and the character and makes the game more immersive and compelling. Naturally, the moral choices you make effect the ending; if you play Torque as a cold blooded killer who murdered his family, then it turns out he is a cold-blooded killer who murdered his family, and if you play him as an innocent man wrongly accused, then it turns out he is innocent. Most amazing, however, is the fact that these moral choices even carry over to the sequel, which plays differently depending on the choices you made here in the first game!

While I was playing The Suffering, I received both Fallout 3 and the new Prince of Persia via Goozex (see how I snuck my referral code in there?), and also finally got the right equipment to play The English fanslation of Mother 3 on a real GBA, but I put all of those things on hold so that I could keep playing this “last-gen” game.

If, like me, you wrote off The Suffering as mindless pap for angry 12-year-olds, I strongly suggest that you pick it up cheap with the intention of playing it for an hour for the LULZ. And then a week later you can thank me for recommending it.

So, then! Sega’s bringing the Phantasy Star MMO series to the DS next week, and the result looks quite nice. Of particular note is the brilliant use of the DS’s touch screen as a freeform chatpad, where everything you write or draw on the touchscreen is displayed in a speech bubble over your character’s head. So, you could quickly scratch out “HELP!” without having to take your eyes off the giant dragon kicking your ass to peck out the letters on a keyboard, or you could quickly draw out plans of attack so that your team members know exactly what you’re talking about. Or, ya know, you could just communicate entirely in drawings of penises.